DATES FOR 2020 TO BE ANNOUNCED SOON

Although these two temples are from the New Kingdom, their earlier versions were sacred to Goddess Hathor. The Nerfertari Temple itself is dedicated not just to Queen Nefertari (wife to Ramses II) but also to Hathor. The Nefertari Temple may well have been the initiation place for Hathor Priestesses and Egyptian Queens, who all had a strong connection to Nubia. This is a poignant place to remember and release wounds related to the fate of priestesses during the Amun Priesthood and later on to what happened to midwives, healers and otherwise powerful women during the European witch hunts.

The drive to the temples is approximately 3 hours (another 3 hours back). You may wish to spend this time on the bus in reflection and open up to recollections, insights and messages. 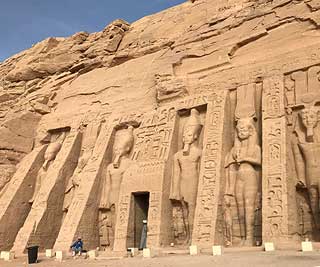 The Elephantine Island marked the South border of Egypt, separating it from Nubian land. Here lies the first Cataract, the whirpools and the wild Nile, presided over by Anuket, one of the deities of the Island whose name means the ’embracing one.’ Anuket was the Divine Daughter in the Triad comprising her, the father (Khnum, responsible for incarnation, creating the body on his pottery wheel) and the mother (Satet, responsible for the flooding of the Nile in this area, and in this way, closely connected to Isis). The natural flooding of the Nile used to be a critical part of the eco-system and cycle of life in Egypt. The building of the Aswan Dam changed this dynamic forever.

One of the temples on Elephantine Island is dedicated to Satet and has powerful initiation scenes. It has been built on top of an old kingdom temple (now in ruins), which was considered to be a passage for souls to come and go and also dedicated to Satet. The third temple, dedicated to Khnum, was a megalithic granite temple (now scattered all over the island) and saw many groups fighting for the ownership of the island through magic and is a powerful energy vortex.

Here, we will perform a healing ceremony with the intention that we use our power for the highest potential not just for our personal healing, but for the betterment of our planet and all souls living on it. This is a chance for you to step into your power and become (or strengthen your role as) a Mother of the New World.

Built during the Ptolemaic Dynasty, this Temple served as the center of the worship of the Goddess Isis, with priestesses and priestess initiates traveling from all around the world to learn, serve and carry out rituals and ceremonies. 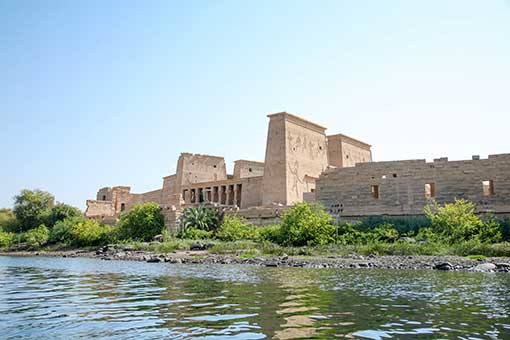 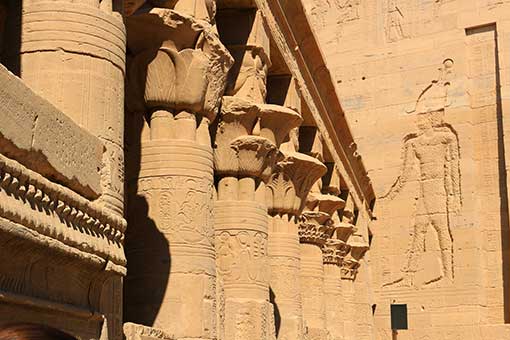 The Nubians kept the Temple alive and it became the last temple to be closed by Christians around 150 years later than other temples of Ancient Egypt. The Christian Church is the descendant of the Amun Priesthood (known for systematically destroying imagery and artefacts related to goddesses and female leaders of ancient Egypt) and the closure is unlikely to have been peaceful. Needless to say, the energies at this temple are very potent and offer us a beautiful opportunity for deep ancestral and collective healing.

The temple was moved to its current location following the construction of the High Dam, which threatened to submerge it permanently. The reconstruction process took ten years.

EMAIL
emmi at feminine revered dot com
or use the contact form.

Your privacy is important to us. Your email address will never be shared or sold.

GET IN TOUCH
Email: emmi at feminine revered dot com
or use the contact form.
Address: New Kasama, Lusaka, Zambia

This website uses cookies to improve your experience while you navigate through the website. Out of these, the cookies that are categorized as necessary are stored on your browser as they are essential for the working of basic functionalities of the website. We also use third-party cookies that help us analyze and understand how you use this website. These cookies will be stored in your browser only with your consent. You also have the option to opt-out of these cookies. But opting out of some of these cookies may affect your browsing experience.
Necessary Always Enabled
Necessary cookies are absolutely essential for the website to function properly. This category only includes cookies that ensures basic functionalities and security features of the website. These cookies do not store any personal information.
Non-necessary
Any cookies that may not be particularly necessary for the website to function and is used specifically to collect user personal data via analytics, ads, other embedded contents are termed as non-necessary cookies. It is mandatory to procure user consent prior to running these cookies on your website.
SAVE & ACCEPT